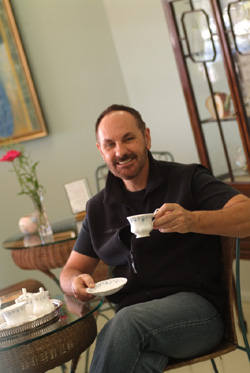 On Friday evening I went to dinner with a dentist from Australia who has consulted with England’s rugby union team (helping them on their way to the 2003 World Cup), a major UK holidays firm and countless dentists worldwide. I wanted to interview him for the book I’m writing, “Double Your Business”.

As an independent dentist working with support staff, Dr Paddi Lund was able to gross well over $1M per annum while working about a third of the hours of a typical dentist.

In Paddi’s book, “Building The Happiness Centred Business”, he talks about taking a chainsaw to the reception desk at his dental practice, clearing it out and replacing it instead with a waiting room that resembles a coffee shop.

At the same time, he introduced private waiting rooms for those people who wanted to sit quietly alone without looking at other people waiting for treatment.

As a patient, you would know the nurse who looked after you – she would be your single point of contact for booking appointments, greeting you on arrival and generally looking after your welfare while at Paddi’s practice.

The result was a very strong relationship between his clients and his dental practice.

He introduced many, many small touches that differentiated his business from any other dentist around. They are difficult to spot unless you are carefully looking for them, yet together they make the whole experience into a fabulously powerful unique selling point that feels so much better than an ordinary dentist. He called these things his Critical None-Essentials, or CNEs.

One of the special ideas was a big button that his patients can press to make him stop. He gets them to try it out on their first visit, so they have the confidence that they are in control, not him. He installed a TV in the ceiling (way back in the 1980s before anybody else thought of it).

His total focus was on making everybody happy – himself, his staff and his clients. This scared off some patients because his prices shot up along with his service, but for the customers he wanted, it was the perfect solution.

It was the topic of CNEs that Sir Clive Woodward wanted to understand and apply to his rugby team. According to his book, “Winning”, the 2003 World Cup winners had 127 extra ideas to help them get a little edge on their competition.

None of these 127 ideas alone made the complete difference, but altogether they helped to create a winning mind-set for the players and give them a practical, mental, emotional or skill boost that took them to the top, helping them to win 42 out of 47 matches from 2000 to 2003’s World Cup final.

This isn’t about rugby, just in case you’re thinking it is.

It’s about getting an edge over your competition. Which is what winning in business is all about.

At the restaurant with Paddi on Friday, he noted that our orders were taken by a waitress who was attentive and friendly. She took the time to build a relationship with us and we had some fun.  She asked how our steak should be cooked and what side-dishes we would like.

But then it was delivered by a completely different waiter. He had no idea who had ordered which dish and so had to ask us.

Worse than this, he made assumptions about the side-dishes and gave us the wrong ones (in fact, one was missing altogether).

The same thing happened for coffee.  I wanted normal, but Paddi wanted decaffeinated.  She took the order and another guy we’d never seen before delivered it by stumbling through the question of “Who ordered the decaff?”.  It was terribly clumsy.

We did not feel special at all.  Each time we were served, we both felt just slightly let down, but not so much that we might have thought to mention it.  Except we were talking customer service and were looking for the cracks.  For a meal that cost around £60 per head, it was not good enough to make us want to go back.

If you are in business, you need to be great at customer service. It should occupy a lot of your thoughts, because it’s where the battle for customer loyalty is won or lost.

It is not enough to simply do the same things as your competition, because that will give you no edge at all. Clive Woodward looked outside rugby to a mad dentist with a chainsaw.

The French restaurant where Paddi and I dined was a nice place, great food and a decent setting. I’d happily eat there again, but I won’t plan to go back again with other friends, or to tell anybody about it.

If you want your business to stand head and shoulders above your competitors, a simple place to start is to think outside the box for ways to delight your customers.

A few weeks ago I wrote an email about a client called John Carmichael, who runs Edinburgh central heating firm Superwarm Services. His business has doubled this year in part because we have applied some lessons learnt from selling consultancy services to selling new boilers. His customers love it, and so does he.

I have worked with hundreds of businesses and sometimes we can apply novel ideas from another industry into yours. Ideas that none of your competitors have used.  These CNEs are the difference that makes the difference.

If you want to win in business, make your service extraordinary. It has doubled Superwarm’s sales, it was worth $1M a year to Paddi Lund and it helped England to a Rugby World Cup. What could it be worth to you?

[box size=”large”]This post was linked in a tweet by Sir Clive Woodward on 31st December 2012, resulting in over 1,000 visitors to the site in the following 48 hours.
Social media is unpredictable, but can be a great source of relevent, free traffic.

We use cookies to help us improve, promote, and protect our services. By continuing to use the site, you agree to our privacy policy.Continue